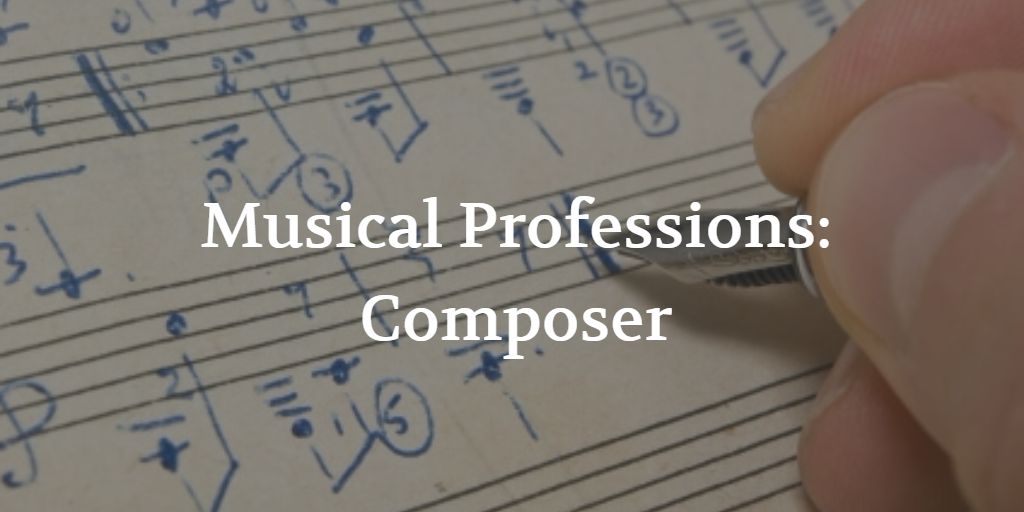 This is the second post in our series, Musical Professions, in which we will be taking a closer look at the myriad of careers available to those with a background in, and a passion for music!
Many musicians chose to pursue a combination of these musical professions, making them incredibly versatile and well-rounded!

There are several different kinds of composers, and we’ll examine just a few today. Many composers undertake a variety of different composition techniques. Composers are generally well versed in musical theory, with a deep understanding of structure, and musical phrasing, to convey their ideas in the best, and most musically interesting manner.

Singer/Songwriter:
This type of composer usually also specializes in an instrument, and often composes music that they can perform themselves on that instrument. Many singer/songwriters choose not to write their music down using classical notation, but remember chord changes and lyrics in their head, or on a lead sheet. This gives them the ability to be spontaneous in their performance and to improvise if they wish!

Film Composer:
We discussed famous film composers more extensively in this post, but composing for film, or scoring for film, as it’s more commonly called, is an incredibly interesting musical profession. Film composers need to write music that is in direct service to the story being told on the screen. The music can also often reveal essential parts of the story, in a very subtle and nuanced manner, as is the case in the most recent Star Wars film. Film composers need to be very sensitive to storytelling techniques.

Arranger:
This is a type of composer who specializes in creating new, interesting arrangements of music that has already been composed. This can be using music composed by someone else, that the arranger is re-imagining, or it can be folk music – passed down aurally, the original composer unknown. An arranger is a unique kind of composer, because they are taking material that already exists, and giving it new life!

What other kinds of composers are there? Tell us in the comments below!