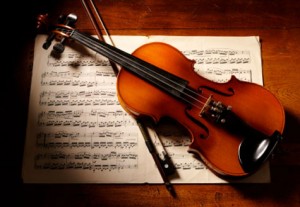 The term “classical music” has become something of  a misnomer, used to describe virtually any music that was not written within the last fifty years. This can be quite misleading, as the term “Classical Music” is actually used to describe a very specific time period in music history. Most importantly, the term refers to stylistic features that are unique to the Classical music era.

The Classical era in music occurred between ~ 1730 and 1820. These dates are inexact, because composers created music that was stylistically classical both before and after these dates. In Europe at the time, art, architecture, dance, and music were all experiencing a fundamental change from the stylistic features of the Baroque period which preceded the Classical period. Many of these changes were inspired by changes in the social, and economic fabric of Western Europe at the time;

While there were numerous composers composing wonderful music in the classical period, there are several whose musical works were so notable that they defined the Classical music era.

Haydn: An Austrian composer who was an especially important composer in the areas of symphonic music, and the evolution of the string quartet. He was a very prolific composer, and played an important part in developing the sonata style which became a hallmark of Classical era music.

Mozart: One of the most infamous composers in history, Mozart had a very short life, dying at the age of 35.  Despite his short life, Mozart composed over 600 works, and was most noted for his symphonic music, concertos, and his contributions to opera buffa.

Schubert:Schubert was another short lived composer; he died at the age of 32. He too was prolific, but unlike Mozart and Haydn, the bulk of Schubert’s compositions were vocal works. Of principal importance were his lieder (art songs). Schubert is also a transitional composer; many of his later works began to demonstrate stylistic features found most commonly in Romantic era music.

Beethoven:Probably one of the most famous composers in history, Beethoven is another transitional composer. His early works were heavily influenced by Mozart, but his later works moved towards stylistic trends found in Romantic era music. Most notable, despite losing his hearing beginning at age 26, Beethoven continued to compose, and perform, even when the hearing loss became profound.

Did you learn anything new about Classical era music? Who is your favourite Classical era composer? Tell us in the comments below!