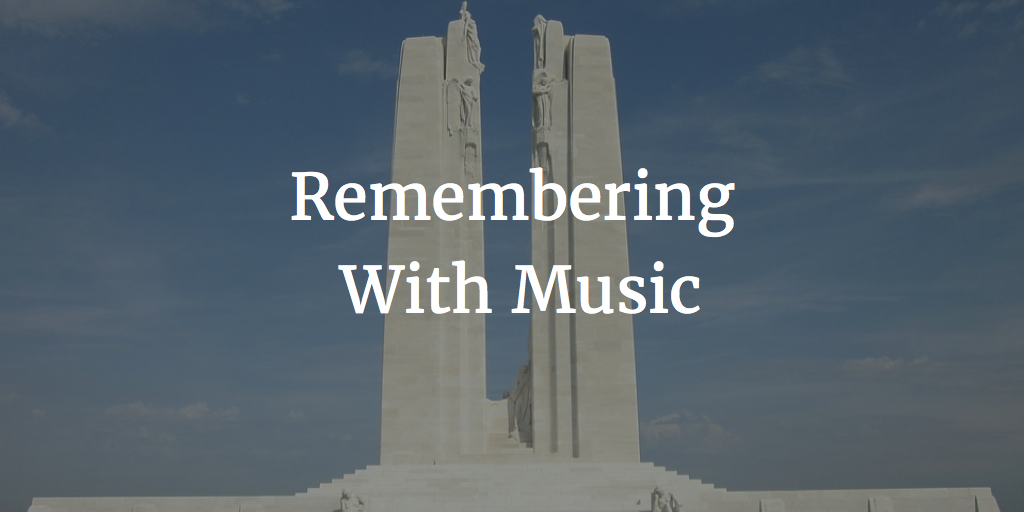 This past Sunday, Canada remembered the Battle of Vimy Ridge, on its 100th anniversary. In 1922, France gave to Canada the land for the memorial, and the surrounding area “forever and in perpetuity,” and the memorial was unveiled in 1936. The shining white marble standing stark against the skyline, remembers the 3598 soldiers who died during the assualt on Vimy Ridge in 1917, as well as the 11, 285 soldier who died in France during the war, and have no grave. Their names are etched into the marble base of the memorial, and the figure representing Canada looks out across the field of battle.

Music accompanies us during our celebrations, but it is also with us in our most solemn times. It helps us to express ourselves when words simply are not enough. It prefaces, and enhances the silence that follows, when we bow our heads together to remember.

During our tour to France and England in 2003 the Calgary Children’s Choir visited the Vimy Ridge War Memorial, very early one summer morning, when the mist was still hanging in the fields below, and the white marble shone against a crystalline blue sky. We were quiet and solemn; confronted by the sheer immensity of the marble figures against the vastness of the sky, and the silent fields below, feeling the weight of that moment. We gathered on the steps of the memorial to sing; offering up our voices together in song to pay our respects.

The Calgary Children’s Choir returned again to France, and to the Vimy Ridge War Memorial in 2013, a decade later, returning to those steps again, to sing, to be silent, and to remember.

Music not only serves as a testament of reverence and remembrance, but it can act as a portal through time, since music is so intrinsically tied to memory. Many of our choristers have remarked that they think of our visit to Vimy Ridge every time they sing or hear ‘Un Canadian Errant,’ one of the pieces we sang on the steps of the memorial. This speaks to the power of music; that it can transport us through time and space, aid us in remembering fine details of events that occurred decades past, and most importantly, keep in living memory the important deeds of those who have come and passed before us.

We welcome your thoughts, and remembrances in the comments below.