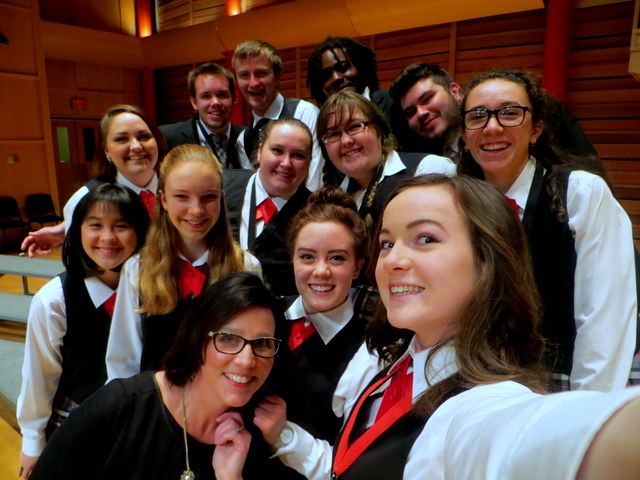 I think that even more important than singing well, is the camaraderie and sense of ensemble that our choristers bring to every rehearsal and performance event. The performing comes out of a deep respect and love for the music and each other. This is what is rewarding for me, in the experience of a concert, and every rehearsal.

One of our choristers remarked that our program reflected the progression through Christmas eve to Christmas day – and in looking at it, she was right, although I hadn’t noticed. As she characterized it, we began with early Christmas Eve – with celebration and caroling songs, such as Gatatumba (Spanish), and Caroling, Caroling (a Nat King Cole classic). From there, we sang Lullabies: Seal Lullaby by Eric Whitacre, and Lullaby by Billy Joel. Then we entered the deepest part of winter (or evening) with songs about dark, cold and lonely winters/nights, such as Gordon Lightfoot’s Song for a Winters’ Night, and then entered the morning with three versions of Sunny Bank – the one by Eleanor Daley was a personal favourite.

Our junior choir, conducted by Esther Woelfle, sang three contrasting pieces that were polished; with dynamic contrast, beautiful head tone, and clear words. They added some claps and swaying, and received rousing applause for their efforts.

The Chandler Zawalykut Scholarship was awarded to the very deserving Josh Carr this year.

Working with these kids, for me, is like working with professionals. They know where they need to be, they know their music, they are respectful of others on stage, and they perform with artistic integrity. I can’t think of anywhere I’d rather have been than onstage with the Calgary Children’s Choir on Saturday night.

(The photo is of the Calgary Youth Choir….. small yet mighty ! 12 dedicated and intelligent singers having a moment of levity before the concert)