A Brief History of Folk Music

Come and check out our annual Folk Concert on March 8th, 2014 at the Rozsa Centre, and hear some great examples of Spanish folk songs! 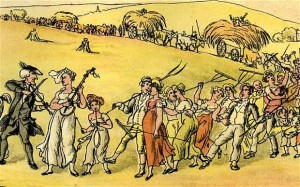 Folk music has a long history, and because of the nature of the music, it has no definitive historical date of origin. It is widely considered to be the ‘music of the common people’ . In the latter part of the 16th Century, only a small, elite portion of society was taught to read, and practice traditional music. The peasants, although almost all illiterate, still played, and enjoyed music. But because they could not read or write, they had to learn music using alternate methods, primarily through oral transmission.

Thus folk music is largely music that was not written down, but passed from person to person by listening and performing the songs many times. It is usually quite specific to the region and culture that it comes from. For example, many Canadian songs from the Maritimes discuss the fishing industry, because it was such an important aspect of Maritime culture.

Since there are no definitive dates for folk music, stylistic characteristics are the common determinant of music belonging to this genre.

– the composer for pieces of folk music is usually unknown

– there are many different versions of the same song

What are some of your favourite folk song? Tell us in the comments below!